Here are just 10 mini beasts who have come out of hiding and are using our waterways. Waterways can play an integral part in the lifecycle of our many our native invertebrates. Here are just a few you can expect to see when exploring your local waterways this summer.

Probably our most well known and easily recognisable dragonfly is the Emperor Dragonfly. Our fascination with this dragonfly comes from its bulkiness and sheer size, yet these features do not detract from its agility and grace whilst in flight. Coming in two colours, blue for males and green for females the two sexes are easily distinguishable from one another. This species is most likely to be found near or on large ponds and lakes, but are often found skimming along canals and other slow flowing water bodies hunting for its prey.  On a rare occasion you may see this frantic flyer resting on marginal vegetation found alongside Britain’s waterways. 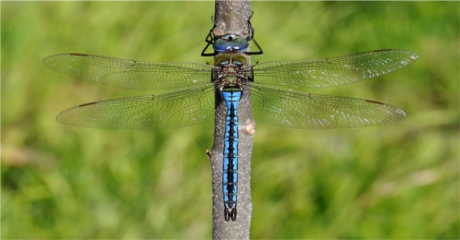 Don’t be fooled by this fly’s name. Many of the 51 species of UK Mayfly can be found skirting through the air and along our waterways outside the month of May. A dainty fly, this species can be recognised by its long, fine tail bristles, clear wings and short antennae. With their wings situated vertically over their bodies, these flies spend their very short lives airborne looking for a mate. You may be lucky and on a clear day see the Mayfly nymph (characterised by their ‘three tails’) underwater where they spend most of their lives.  The Mayfly plays an important role within the food chain providing food for a variety of species including bats and amphibians. You can do this species a favour and help these pollution-sensitive critters by ensuring your boat, car or house doesn’t leak potential contaminants into the waterways. 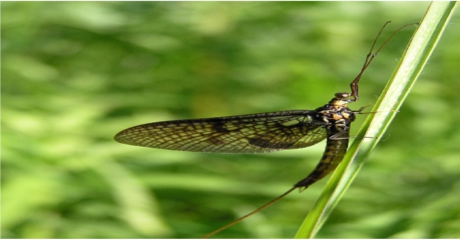 The Banded Demoiselle is one of only two UK species of damselfly with obviously coloured wings; the other being the Beautiful Demoiselle. The male Banded Demoiselle is often more striking than its female counterpart having an iridescent blue-green body colour and a ‘fingertip’ black-blue mark at the midpoint of the wing. The female on the other hand has pale light green wings and a green and bronze body. Unlike the Emperor Dragonfly, the Banded Demoiselle  has slower and more flutter-like flight akin to that of a butterfly. Preferring slow-flowing lowland water bodies with muddy bottoms, this species can be a common site resting on bank side vegetation or flying along a waterway. 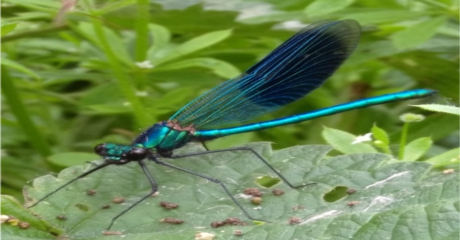 You need only peer over the deck of your boat or over the side of the towpath to catch a glimpse of the Whirligig Beetle. Made up of 12 similar species of beetles, these beetles are black with an oval body shape and have the back two legs adapted into short, flat paddles for its aquatic lifestyle.   They are found rapidly skimming the surface of water bodies in groups, preying upon small invertebrates unfortunate enough to fall into the water. They are also well adapted to diving underwater to catch prey. 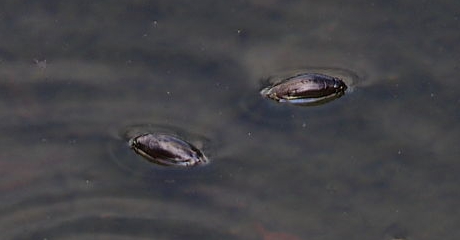 If Whirligig Beetles are the Ferrari of surface dwelling invertebrates, that would make the water boatmen the Reliant Robin, spending more time on its back than anything. Although this is not entirely true as some species swim on their fronts . To clear up confusions ecologists now refer to these two species as Water Boatmen or Backswimmers. You guessed it, the ones who swim on their backs are called Backswimmers and those on their front are Water Boatmen. Brown in appearance and having two long hairy hind legs used for paddling, they use their smaller front legs for scooping up food. Another difference to note is that Backswimmers are carnivorous, whilst the Water Boatmen are vegetarian. Look out for these guys on calm or slow moving waterbodies. 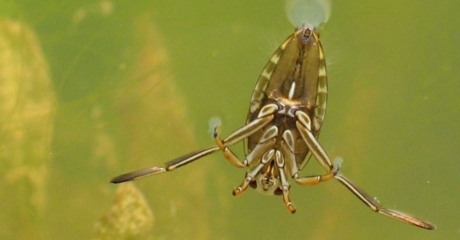 A striking arachnid, the Wasp Spider receives its name after its body pattern resembling a wasps colouration.  Fear not however as this spider is completely harmless and its exotic colouration is a means of defence to deter would be predators. With its black and yellow pattern it is a very easy species to identify. You will find this critter building its orb web in grasslands, but this species is also known to live in gardens, woodlands, farmland and coastal areas, so it wouldn’t be a push to say they may be living along the waterways. The Wasp Spider is a relatively new arrival to the UK as of 1920’s from the Mediterranean and their spread north as a result from a warming climate. 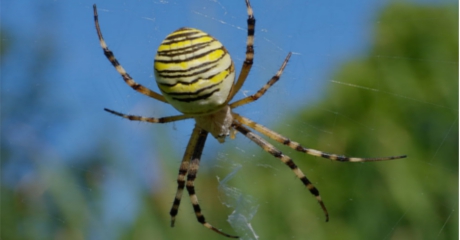 With so many butterflies that frequent UK waterways how do you choose which one to highlight? The Painted Lady migrates from the desert fringes in Africa to Europe and the UK in time for summer. This butterfly has orange-brown wings with black and white spots on its forewing. With its undersides mottled brown with spots. In a good year the Painted Lady can be seen almost anywhere in the UK. For your best chance to spot this butterfly and in fact most butterfly species, look out for them mid-morning to late afternoon on a sunny and windless day, paying close attention to flowering plants along the banks. 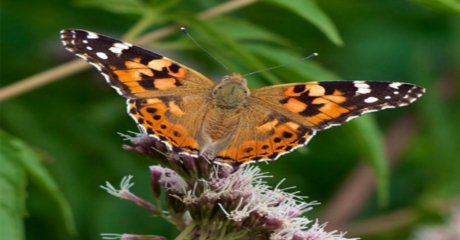 In the UK there are 25 species of bumblebee to spot.  The White-Tailed Bumblebee is one of the more common ones you will see buzzing around from March through to November. As the name suggests this Bumblebee has a bright white tail and black and yellow bands. This species is very similar to other bumblebees and can be difficult to tell apart. The males however do have extra yellow tufts on their head and thorax (middle segment). With bumblebee populations in decline due to habitat loss, canals and navigations can play a major role in providing a wildlife corridor to connect fragmented habitats that bees could traverse, especially when planted with flowers. 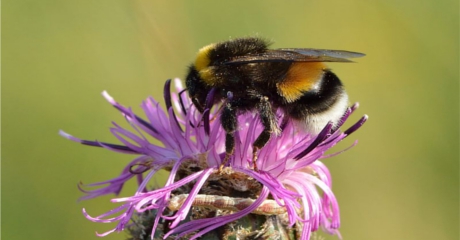 You are more likely to hear the grasshopper than see it. With most UK grasshoppers being various shades of green or brown or both to blend into their preferred habitat, they can be extremely difficult to spot.  The main difference between a grasshopper and a cricket is that the grasshopper has short antennae. They are vegetarians opting to eat grass, leaves, corn and other vegetation. You will find these critters inhabiting areas of long grass where plenty of food can be found. 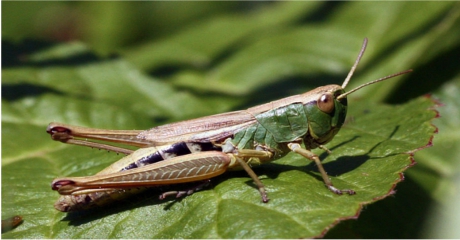 Photo: Meadow Grasshoppers are one of our more common species of Grasshoppers, look for the brown stripe down their back and green sides. (Photo by Charlesjsharp (Own work, from Sharp Photography) [CC BY-SA 4.0], via Wikimedia Commons)

Another terrestrial bug to keep and eye out for is the shield bug. An adult of this species is easy to recognise by either its flattish oval shape or five-sided shield shape.  These critters often adorn brown or green colourations similar to their food plant, as to avoid predation from birds and other predators. Close inspection of vegetation will give you the best chances of seeing these interesting little ‘true bugs’. It is often seen that Shield Bugs show parental care and defend their young, by releasing a pungent smelling liquid to ward of predators or to remain close to where their eggs are laid. 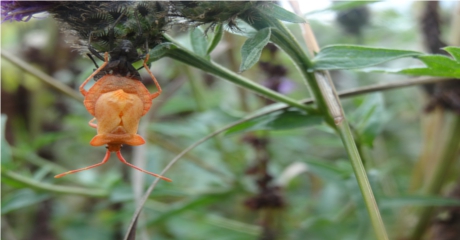 Photo: Recently shed Hawthorne Shield Bug will gradually lose its orange colour as its new exoskeleton hardens, during this stage the bug is very susceptible to predation from birds (Photo by: Alex Melson)

If you’re interested in finding out more about amazing creatures visit national insect week and see what is going on in your area.

WOW is The Inland Waterways Association’s programme of activities for children to learn more about wildlife using our waterway network. Visit Wild Over Waterways to download activities for kids and m enthused by nature.

Red diesel budget announcement is a win for boaters

Keeping the use of red diesel for both private and commercial boats is fantastic news for the inland waterways. IWA…

Covid-19 and using the inland waterways

We have been engaging with DEFRA on how the proposed steps of the Government’s roadmap, announced on 22nd February, should…

Our inland waterways are vibrant, valuable green spaces that connect city and countryside, alive with boats and enjoyed by millions….

Come to your Census – advice for boaters