The overwhelming proportion of craft currently navigating our inland waterways are propelled by fossil fuels, mainly diesel but in many cases petrol. While their overall contribution to UK carbon emissions is small, it will inevitably come under scrutiny in the near future and, in any case, we also have a social responsibility to ‘do our bit’. While there are many steps boaters can take right now to reduce carbon emissions from their craft, such as not running engines at locks, the thrust of this feature is to paint a picture of what sustainable propulsion on our canals and rivers might look like in the coming decades. Technology will inevitably develop, possibly in ways we do not envisage, but IWA’s focus is on technologies that are currently available or close to being available rather than ‘blue sky’ thinking.

There are many stakeholders in the inland waterways world, from boaters, navigation authorities, boat-builders and marinas, to hire companies, chandlers, marine surveyors, BSS inspectors and more. Most will be required to make a significant (to them) investment if we are to resolve the issue. It is hoped that our vision for the future, if ultimately validated, will allow these groups to move forward with a degree of confidence.

When we talk about the boats themselves, we’re mainly referring to steel, diesel-powered canal craft, both narrow and wide-beam. The reason for this is the large number in the existing fleet and within the IWA membership, as well as the similarities of the basic design. However, the principles established will be applicable in some cases to other types of craft, including river boats, but not all.

This is not a technical feature, but is assembled from my technical knowledge (limited), the useful discussions that have taken place over the last month or two with IWA colleagues, and some feedback from the ‘trade’. Hopefully it will prompt others with specialist knowledge or bright ideas to do further work to underline or amend the vision. The problems are largely economic and logistical rather than technical. 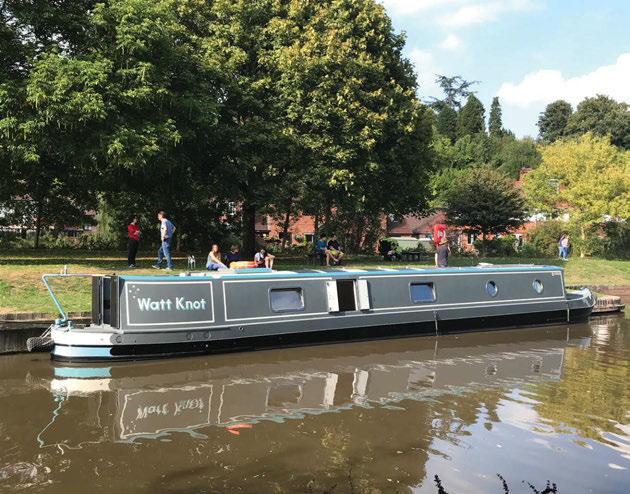 It seems extremely likely that the canal boat of the future will be driven by an electric motor. The technology exists and is mature. Quite a few boats have been built over the years with electric motors and they work. Motor vehicle technology will lead development.

As with road vehicles, the problem is how to carry the energy around. Hydrocarbon liquids are a very efficient and effective method of transporting energy. There are two current solutions, both of which are being actively developed for road and rail vehicles:

There are very few issues installing a battery bank in a narrowboat. Weight is not a problem and space is more readily available than in a car. Power requirements are well within the range of the current technology and less than most road cars. The main drawback of batteries is range and recharge times. Both will improve. Batteries can be recharged using a shore connection, by onboard photovoltaic cells or small wind turbines. PV cells and wind turbines, given the current state of development, will not be able to provide all the energy required. However, PV cells are developing rapidly. Batteries can also be charged by hydrogen fuel cells, see below.

Batteries are, of course, only ‘green’ if the electricity used to charge them is ‘green’, which at the moment is only partly true. This is a national problem and will not be addressed here. There are also environmental issues around the manufacture, recycling and disposal of batteries.

Hydrogen is an efficient method of transporting energy but not as good as hydrocarbon liquids. The hydrogen is converted into electricity in a fuel cell. The technology is well developed (and will develop further) and the size of existing cells is within that required to propel a narrowboat. Hydrogen, while potentially dangerous, can be engineered, in my opinion, to be no more hazardous than a petrol system. It will never be as intrinsically safe as a diesel system. Yet, California has 10,000 hydrogen cars and they are commercially available worldwide. Germany has hydrogen trains and they will be on the UK rail system too in a year or so. I assume they will be allowed in tunnels! Hydrogen engineering is well understood and mature.

Currently hydrogen is not ‘green’ as it is mainly manufactured from hydrocarbon liquids and gases. This could be made ‘semi-green’ with CO2 capture. It can also be manufactured from ‘green’ electricity if available in sufficient quantity. Again, this is a national problem not confined to the waterways.

IWA’s current vision for new-build narrowboats of the future 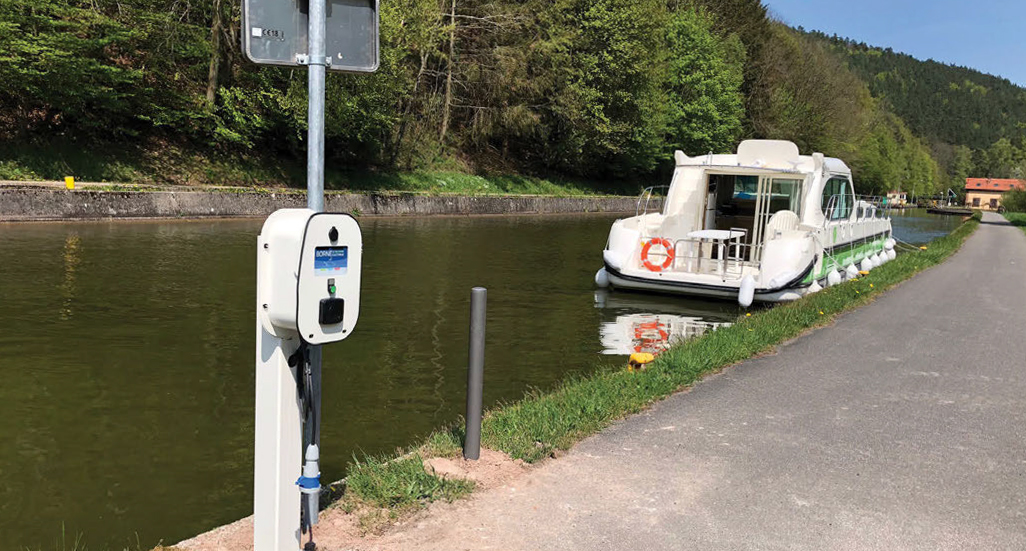 Photo: ‘Tout vert’ and it only takes two hours to charge! France is well ahead of the UK network with electric hire-boats and newly installed charging infrastructure on some waterways.

Boats last a long time, as do their diesel engines. Owners, especially those with few engine hours a year, will be reluctant to convert from diesel to electric drive unless required by legislation, which is unlikely. It therefore follows that most of the existing diesel fleet will be with us for many years to come.

Given that we don’t wish these boats to be made obsolete by legislation or owners being forced into expensive conversions, we need to find a way of significantly reducing the environmental impact of the existing diesel engine.

One possibility is to use biodiesel. While not entirely ‘green’ (its manufacture requires use of a small quantity of hydrocarbon) it is a significant improvement on mineral diesel. Using biodiesel at 100% concentration has a number of disadvantages and problems. On our inland waterways, however, we can probably mitigate most:

1) Biodiesel is manufactured from vegetable oil, and almost any vegetable oil can be used. The most common is palm oil, which gives a biodiesel that thickens in temperatures such as we experience during UK winters. This isn’t a problem when used at low percentages in mineral diesel, as in current road diesel, but it does cause issues at 100%, particularly when fuel lies unused in tanks for a significant period. Fortunately, proprietary biodiesels (using a blend of oils) are now being produced which can resist northern European winter temperatures.

2) Pure biodiesel burns at a slower rate than mineral diesel and hence high revving, turbo-charged road diesels can struggle on 100% biodiesel. This is not a problem when blended at low percentages into mineral diesel. Most, if not all, canal-boat engines are low-revving and not turbo-charged, and so we would not expect this to be a problem for the majority of craft.

3) The rubber seals and similar components of some canal-craft engines, mainly in fuel systems, may not be fully resistant to 100% biodiesel. This can be corrected – at a cost. Work would need to be done to identify and convert these engines, but it is believed that most modern ones are biodiesel resistant.

5) Biodiesel is manufactured from vegetable oils, and its production normally uses land which could otherwise be given over to food. In most cases, the oil itself is a foodstuff. For this reason biodiesel has not become the universal solution to road vehicles emissions. Inland waterway use, however, would be relatively small in comparison to cars etc, and so could be acceptable.

Assuming existing boats can be converted to biodiesel, the current refuelling infrastructure could be used.

Future builds, however, will require more investment, whether we are considering an electric recharging infrastructure or a hydrogen refuelling one. At the moment we’re in a catch-22 situation:
commercial operators will not invest until the boats to use it exist, and private owners won’t buy the boats until the infrastructure is available. It is unlikely that Government will stump up the cash, as is happening, to some extent, with road transport.

An electric charging infrastructure does, of course, exist in most marinas and this will be adequate for slow charging of boats moored for significant periods. It would require upgrading for faster charging. This could be adequate for most ‘hybrid’ (hydrogen/electric) boats as envisaged earlier. It is difficult to imagine every visitor mooring on the system being equipped with charging points.

Hydrogen refuelling stations are more problematic. None exists on the system as far as we know. They will also need a distribution system, probably tankers, to service them. They will be more costly than red diesel pumps and tanks, but the technology is available. Work is currently being done to develop hydrogen infrastructure in the UK, both for road/rail transport and for domestic use, but this is some way off. The natural gas industry is actively looking at using the gas grid to distribute hydrogen for domestic use. This may ultimately develop into a partial solution.

It may also be possible to develop a network of hydrogen refuelling stations around hire-fleet bases, if enough hire companies could be persuaded to use hydrogen boats. Hire-boats are typically refuelled at base, sent out for one or two weeks and refuelled at the same base on their return. Hire-boats are also replaced at relatively frequent intervals, compared with private boats. This combination could make installing a hydrogen refuelling station at a hire-base reasonably economical, with a hydrogen fleet being available in a short period of time.

If sufficient bases could be ‘converted’ this would provide a basic network for private boaters to use and hence encourage the uptake of hydrogen boats, eventually leading to further development of the hydrogen refuelling infrastructure. This would only apply to the central part of the system, however, where hire bases are common, and leave a problem for outlying waterways, at least initially.

This article is not intended to be a final solution to the problem of sustainable boating on our inland waterways. It tries to paint a picture of where we might go and is intended to stimulate discussion, development and the generation of new ideas. Some may disagree with parts of it.

We would be pleased to have any comments, supportive or not, so that we can continue to develop the vision. Email alison.smedley@waterways.org.uk if you’d like to have your say.

Photo top: Mothership Marine’s 57ft semi-trad stern with 10kW electric drive and 2kW of solar panels was launched last year. It’s not entirely electric – a 7kW ‘range-extending’ generator is also on board – but it’s not bad!

Can I visit the waterways? The latest national lockdown for England announced by Government on 4th January means that once…

This has been an incredibly tough year for many people. The continued support of our members, volunteers and donors means…

Restoration Raffle – the winners and a plea

We are so grateful for the support of our members and volunteers as together, through the purchase of our 2020…