Here IWA Navigation Committee’s David Struckett has put together an overview of how to moor your boat, what knots to use and the safety precautions to take.


It is often a mistake to think that there is little flow on a canal.  Every time a moored craft is passed by another boat, the water under it and around the hull will start to move – first in the same direction as the boat approaching and then move backwards, quite rapidly if the canal is shallow, as the boat passes. One only has to watch the water’s edge while cruising to see this effect. On rivers, of course there is also the constant flow of the water – as well as any turbulence caused by passing craft.

This is why the best angle for the rope to each end of the boat should be as long as possible along the bank. The mooring ropes have to resist movement along the canal or river, as well as resisting movement from the bank.

There are several advantages of using long lines, rather than the shortest route to the bank:

Probably the most important advantage of using long lines is the first one – even canals can vary in level, particularly overnight. If the boat is close moored i.e. with short lines at right angles to the bank – the boat will tend to pull the bank or piling into the canal if the level goes either up or down. It also causes more strain on the boat.

Of course, those who use rivers and coastal cruising will know this already – because all sailors are aware of tides and other variations – and will know about springs and long lines for mooring in docks and harbours. The RYA recommend a length of line equal to about three times the expected change (or shortest route) in level, as a guide.

Regular river users will also know about always mooring facing up-stream, offering the bow to the on-coming flow and the bow-line to be long, to cope with any changes in flow and level.

When boats are moored without wasting too much space between them – long lines suggest that the ropes from each boat should overlap. This is essential if the boats are not to bump into one another as other boats pass and suggests that permanent moorings should always provide dual mooring posts or rings at each end of adjoining pitches. It also suggests that when using mooring pins or stakes – that neighbouring boats should overlap their mooring lines in order to moor closer together.

The round turn and two half hitches is probably the standard method to attach a line to a ring, post or bollard for mooring a boat (or even a tree or branch). However, it is also preferred by many cruising boat-owners to pass the rope around or through a bollard or ring, and back to the boat to tie off – for security and also to halve the load on the rope when under strain from the moving water.

If a stake in the ground is to be used, the same might apply – some stakes have an eye to pass the rope through.  Also for security reasons it is less likely that pranksters will unhitch the rope if is through an eye or ring, or is tight around a bollard a couple of turns – and the knot is tied on the boat. 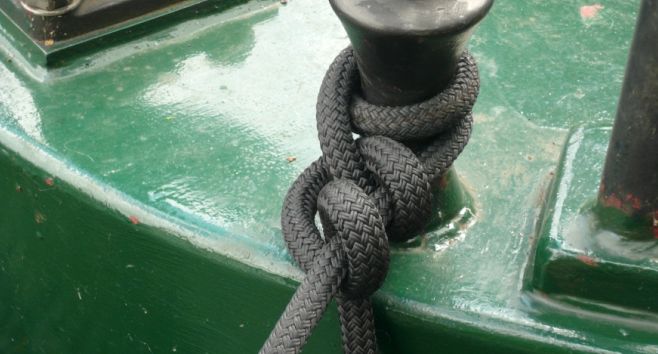 Round turn and two half hitches

Another knot sometimes seen is the clove hitch which can be easily tied by forming two loops in the rope and overlapping one over the other. In fact if you look closely, the two loops form two half-hitches – but produced from a different starting point on the rope (you don’t need an end). It can be quick to tie – but beware, as if the knot is pulled very tight it can be more difficult to undo in a hurry than the method above.

The tee post is often on the bow of narrow boats, and also in other places, a diagonal looping of the rope around the tee is a quick way to tie up. It is best to finish it with a half-hitch, or the loops will gradually come loose. 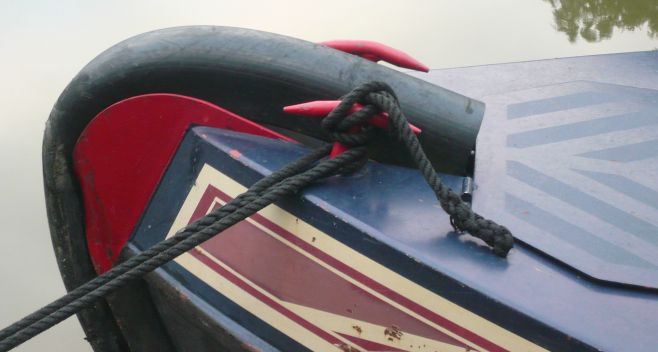 The usual mooring stakes have a loop towards the top for passing the rope through – though short term mooring (e.g. a lunch stop!) you may decide to tie to the stake. Slant the stake away from the boat (like a tent-peg), to ensure that the load does not immediately pull the pin over (and therefore out). A hammer the size of a club-hammer is usually used to drive them into the ground. Remember to hammer in-line with the angle of the stake.

A short length of chain with a ring at either end can be useful where there is bank protection in the form of piling. The horizontal rail is fixed to the upright sheet piling by bolts every metre or so, and spaces near the bolts offer passage for the chain to go through – and the mooring rope is thus only passed through the end rings, rather than through sharp edges of the metal-work.

Again, the rope is passed back to the boat for tying off, and if both rings are used (rather than one used because often one end is smaller than the other, suggesting that it should be passed through), the load on the chain can also be halved (approximately).

Always look out for the horizontal bolts in the piling – if the chain is passed by these, the strain is taken directly by the anchoring of the bolt and not by the horizontal metal-work. In fact you should always avoid relying on the strength of secondary components in piling – you can often see damage where a boat has tied too tightly to the metalwork rather than using long lines to the bolts.

Another advantage of using chains is security.  The rope (and chain) will be mostly over the water and lower than the bank and towpath – making it out of reach or at least tending to be more difficult to interfere with by potential pranksters, than stakes.

Simple solid hooks are on the market which can also hitch onto the metal-work of piling (possibly onto wood versions, if there are bolts, or spaces to pass behind). Care has to be taken though – it is essential that long lines are in use – and that the ropes are relatively tight – so that any change in level will not cause change in tension, as if they go slack these have been known to drop off due to water motion shaking them loose.

It’s also easier for hooks to be lifted off for fun – if loosely tied. It is also important to look for the bolts in the piling – don’t rely on hooking onto a piece of metal or wood-work. Pass the rope through the hook, and back to the boat for tying off, as with chains.

Sometimes if the canal or river is shallow, a boat can be moored out from the bank by some distance, by the use of poles, and access arranged with a gang-plank.  The same preference for long lines is required – which might need to be longer still, but to reduce swinging movements direct lines are also used.  Note that these will be longer than with close mooring because of the distance from the bank – which will allow for some change in water level.

In a restricted place, the long lines can be arranged as springs – back towards the other end, which together with the close lines will also keep the boat in one place, but using no more length of bank or towpath than the length of the boat.

Barge moored away from bank

Encourage everyone to use long lines for mooring; it is good practise to reduce load and wear on rope, bollards, bank piling, mooring pegs, structure of the boat, boat bollards, and also to reduce the damage done when the water level changes more dramatically.

The last one may be rare on the inland waterways, but any breach in a canal or change in level for emergency reasons, will result in damage to boat and/or bank (i.e. to both boat owner AND navigation authority), or of course pull your mooring pins out.

Those who moor sensibly cause little or no damage.  Those who moor carelessly with short rope are either hanging there, damaging the boat, possibly causing the bank to give way, or drifting down-stream with rope in the water.

This website has a wealth of information for the new and experienced boater.  Read about boating, mooring your boat and other safety measures.  New boaters can also download the Boater’s Handbook.

Staying safe afloat in a flood

The trustees are pleased to announce the appointment of Phil Hornsey as IWA’s new Chief Executive. Phil will join IWA…

What are your Seven Wonders of the Waterways?

In the 66 years since Robert Aickman published his Seven Wonders of the Waterways, hundreds of miles of canal have…

Can I visit the waterways? The latest national lockdown for England announced by Government on 4th January means that once…