Between the last talk in April, somewhat appropriately titled 'Be Careful What You Wish For', and the summer break, the Branch organised two walks, and attended a Canal festival.

The first walk, in May was along the Beeston Cut, returning via a section of the River Trent footpath. We learned that pre World War 2, a section of the Beeston Cut was known ( officially ) as Beeston Lido and was a recognised place for the public to swim. Following our walk we had an all too brief visit to the Canalside Heritage centre for refreshments, and a quick summary of the history of the project.

The late May Bank holiday saw the Erewash Canal Preservation & Development Association ( ECP&DA ) celebrating the 50th anniversary of its founding by holding a festival at Great Northern Basin, Langley Mill. This gave the Branch the opportunity to try out the new, centrally supplied, very clearly branded IWA stalls. With help from our Region Chairman and his wife, and several Branch members, we managed a presence at this busy and well attended festival. The overflight by a Spitfire was most spectacular, your scribe wasn't quick enough to capture a decent photo. Congratulations to ECP&DA on this milestone, and more importantly, all they have achieved over the years.

For our final walk, we joined members of the Derby & Sandiacre Canal Society for a walk along the river Derwent from Derby city centre to Darley Abbey and back. We heard how the canal used to cross the river before the destruction of much of the original line in the 1960's by what is now the A52. We also learned about the Society's plans for a trip boat on the river Derwent from outside the Silk Mills as far as the next weir. It is a remarkably peaceful and tranquil stretch of water for being so close to the city centre, and would be splendid to explore it by water.

In July, a group of members and their families gathered at Derwentmouth Lock for the annual Lock Wind, this year in aid of the Derby & Sandiacre Canal Restoration. £1 boats passed through the lock during the day, most of them making a donation or stopping to buy one of Mavis's cakes, with over £200 raised on the day

Finally, in September a group of 21 Branch members and Xylem employees gathered at Sainsburys Castle Boulevard for another Canal Cleanup. In excellent weather, we set off towards Beeston and were soon hauling out the bicycles ( feature of this canal ). Our enthusiastic grapplers swamped the convoluted CRT process for onward shipment of the rubbish, but before calling a halt in mid afternoon, we had filled the workboat twice, emptied it into the truck twice, and left it full again. Our thanks to CRT for the use of workboat 'Blaby' and its friendly & supportive crew, Xylem for continued support with volunteers, Sainsburys for use of their parking, and Notts Constabulary for turning up and taking the gun away! ( It was only a BB pistol, but better in their hands than anyone elses ) 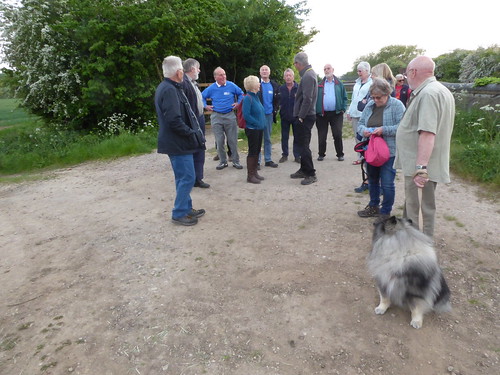 Above is a gallery of photos from the events described above.